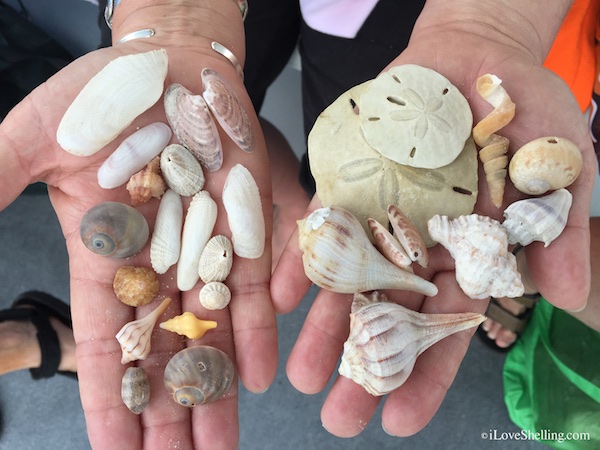 To be by the sea collecting seashells is an amazing hobby/sport/therapy/obsession.

Sharing a shelling experience with a boat load of other people who’ve become friends after collecting shell on the beach together or meeting new friends, we all feel the same way…

As soon as the Sight Sea-R Cruises shelling boat landed on Big Hickory Island, we saw that the beach was covered with mini shells.

Ooooh and I was thrilled to see that so many other people love the minis like I do.

Jenny (on the right) was with Jenny and John (VA) who showed me the awesome plastic pipe connector contraption John made for his shelling scoop so that he could break it down to put in his luggage. Brilliant!

Helen from Indiana found a beautiful assortment of shells. She not only found this SAND DOLLAR she’s holding up but her other favorites were displayed in the first photo up top. Exshellent!

Roger, Charlie, Dawn (WI) and Jan (Iowa) came back with some treasures as well. Jan was happy she found a beautiful big ANGEL WING.

Dawn found all sorts of fab shells like the little DUSKY CONE in the middle.

Quite a few other people found GAUDY NATICAS too like Amy from VA.

Here she is (on the left) with the other cutie shellutie Virginia girls Donna, Rene and Susan.

Amy especially wanted to find an ALPHABET CONE … and she found an adorable one. Congrats!

Even though we all found treasures on the beach on our shelling trip, Sealife By Congress gave every single person on our iLoveShelling cruise a $25 gift certificate to their store on Sanibel. So generous!

It’s so much fun to meet people around the world on shelling cruises like this! On our last Sight Sea-R Cruises iLoveShelling shelling adventure, Steve Stephens from Columbus, Ohio was aboard with his family. Steve wrote an extraordinary article for the Columbus Dispatch that explains our day on our shelling trip to Big Hickory… its fantastic! Its so cool, you have to read it – CLICK HERE.