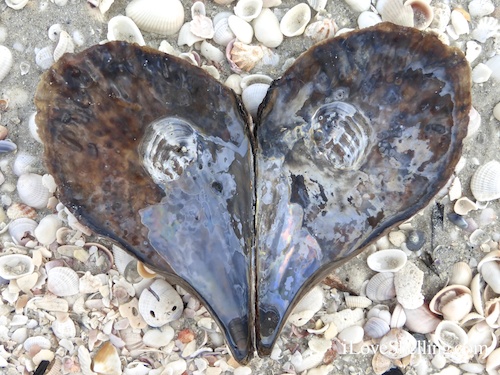 While talking to Gary on our iLoveShelling shelling cruise last week, he told me about four huge HORSE CONCHS and other great shells he and his family Cameron, Mary and Lauren found on Sanibel during their visit from Nashville. Amazing!

He also asked me if PEN SHELLS could make PEARLS and I immediately answered “It’s rare to find the PEARLS washed up on the beach but… Yes they can!”. He found something that looked like a PEARL inside a PEN SHELL while looking for other shells like TRUE TULIPS which can hide or get trapped inside them (CLICK HERE for a video to show this). Of course I had to see it.

If you look closely, you can see a milky circle on the inside of his shell and at about “9 o’clock” on that circle (the MOLLUSK’s muscle scar where it was connected to the shell) you can see a little ball on the shell. That’s a PEARL.

This type of PEARL is called a BLISTER PEARL. Cool! BLISTER PEARLS are attached to the shell so mostly likely the PEARL would break if he tried pop it out to make any jewelry from it but it’s still cool for him to have seen it…. questioned it…. and ask me about it so we can all learn more.

The only reason I knew anything about PEN SHELL PEARLS was by seeing my friend Rachel Fields’ scientific display at the Sanibel Shell Festival this year…about Natural Pearls and being fascinated by her blue ribbon exhibit.

After sending her photos of Gary’s PEN SHELL, Rachel responded by saying…

“That does look like a pearl!  It’s called a blister pearl when formation occurs and the growth is still attached to the shell”.

Now you can see from Gary’s shell that his PEARL formed against the shell and it still attached…. a BLISTER PEARL. Yep, it’s just like our type of skin blisters although we make just fluid inside our blister instead of a PEARL, right? When I get a blister, I’d much rather go through the pain to get a PEARL instead of crummy fluid. LOL

When a PEN SHELL produces a FREE-FORM PEARL, it can be a gorgeous lustrous PEARL like Rachel showed in her exhibit. The problem with finding pretty PEN PEARLS is that they crack easily after a week or two and if they do make it without cracking, it may take about 4 or 5 years for them to become pearlescent.

But when they don’t crack and become lustrous…. Gorgeous!

Rachel was kind enough to share more information from her Natural Pearl presentation, so I thought it would be easier to publish a page dedicated to her research- CLICK HERE. This will probably answer all of your questions because it answered mine! Like… “What other shells make PEARLS?”.

She shows us QUAHOGS…

QUEEN CONCHS produce PEARLS as well- They are pink! I looked at the book Pink Pearl: A Natural Treasure of the Caribbean before we went on a shelling trip to Turks and Caicos last year so I could study up and keep my eye out for them. Of course its like looking for a needle in a haystack but you bet your bottom sand dollar… I searched.

Thank you Gary, Mary, Cameron and Lauren for coming on the iLoveShelling cruise with me and asking me about your PEN SHELL PEARL and also to Rachel (NYC) for sharing so much invaluable information with all of us about Natural Pearls. This is another example about why i Love Shelling, Shellers and the Shelling Community! It’s so edshellcational!