So Many Rare Shells Found On Sanibel This Week 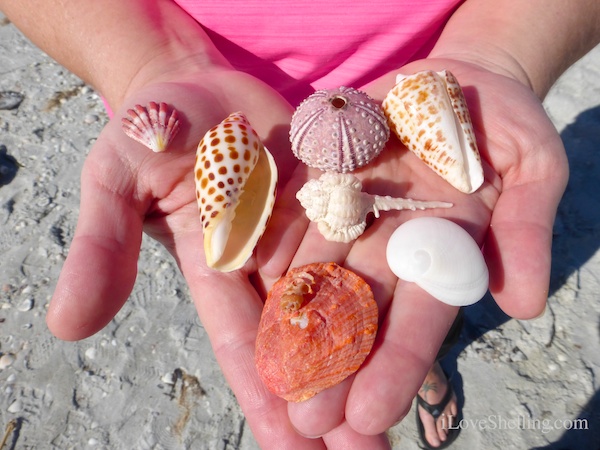 I have said countless times that the beaches of Southwest Florida change every day and by the hour so finding shells becomes a fascinating treasure hunt. So I would say Tam Tam from Michigan has had quite a treasure hunt this week! She found so many shells that aren’t found on our beaches all that often like that sweet baby LIONS PAW (top left), a CABRITS MUREX (middle), a LONG SPINED SEA URCHIN (okay, thats not a shell but its just so beautiful and big for that type of URCHIN) and a THORNY OYSTER (bottom). The ALPHABET CONE isn’t rare at all but it is just dang gorgeous…. and same for that BABY’S EAR. And of course you see she found a JUNONIA too!

Tammy found her LIONS PAW along West Gulf Drive and found her JUNONIA and CABRITS at BLIND PASS SANIBEL. Her friend Barb from Virginia found a CABRITS MUREX at Blind Pass Sanibel too!

I think this is the tiniest, cutest CABRITS MUREX Ive ever seen. Wow!

Oh but hold on there’s more…  Sue found a LIONS PAW as well!

Her LIONS PAW is soooo pretty, right? The CONE is just as spectacshellar and both were found off West Gulf Drive. That is a very dark rich color variation of a FLORIDA CONE. Shellicious!

Lisa and Derek from Kansas were very happy to be finding such a variety of shells at Blind Pass Sanibel.

They are very new to shelling but as you can see, they already have a great eye for such pretty shells. They found out about all the seashells on Sanibel from Derek’s dad Darrell who caught the shelling bug about 5 years ago on his first visit to Sanibel. Hey Darrell! Thanks for spreading the shelling love on to your kids- Derek and Lisa cracked me up!

Lisa could identify most of their other shells but she showed me this little mini shell and asked me what it was. Its a PITTED MUREX! I don’t find these all that often but I loved that even as new shellers, they both were so interested in this tiny shell that turned out to be not all that common in our area.

Every day is a new adventure on Sanibel, Captiva and all of the beaches in southwest Florida. What I find even more rare than these shells that my lucky shelling friends found, is that our islands are filled with so many friendly, smiling folks that enjoy every gift from the sea whether its rare or not. (oh…and the view aint half bad either ;) )