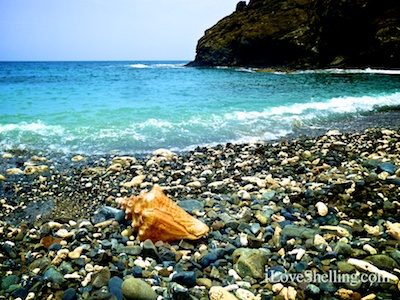 After returning home from a shell collecting trip, there are tasks of unpacking, cleaning and sorting to begin some sort of process for organization. I’ve written a few posts on our trip to Guantanamo Bay, Cuba (read them by CLICKING HERE) but there were so many shells I could not identify like this GOLD-MOUTH TRITON.

Clark and I are familiar with Southwest Florida shells, but the different species of shells from Cuba? Not so much. So to find the identity of some of these Caribbean shells we found in Guantanamo Bay … I’ve had my nose stuck in oodles of books, surfed through gobs of websites and also very thankful for the exshellent help from MurexKen (Thank you!). Here are some of the books I used for research…

If you have ever collected shells from the Bahamas, Turks and Caicos, the Virgin Islands or any where else in the Caribbean, these identifications along with our other shelling trip posts might help you identify your shells too.  I was so excited when we got back, I made a mistake by calling this a CUBAN FROG SHELL (CLICK HERE to see the photo I’m referring to). It’s NOT! It’s a CORRUGATED (or GAUDY) FROG SHELL.

After feeling a little embarrassed about the wrong ID, I got over it pretty quickly since they look so similar. Live, Shell and Learn.  That’s half the fun of going to a new destination to find shells….we get to see and learn about other shells from around the world! So now you can see why I got these guys mixed up. Here’s the CUBAN FROG SHELLS (or also called GRANULAR FROG SHELLS) …

These REHDERI TRITONS look similar to the KNOBBED but have that darker brown color on the inner lip. Beautiful!

See how similar some of these shells are? This next one is the DOG HEAD TRITON.

FYI- I changed this photo on August 9, 2013 since the original shell photograph was not a DOG HEAD TRITON. Lee from GTMO graciously took this photo of DOG HEAD TRITONS so I could show what they look like (since I mentioned them already). The funny thing is, we have soooo many fab shells from GTMO that I could have posted about and I chose one shell… that I misidentified …. and then didn’t have the real thing to show you? geez Whaddupwidat? LOL Thanks Lee for the photo!

I showed you the incredibly hairy ATLANTIC HAIRY TRITON that Lee found (if you missed it CLICK HERE) but we were thrilled to even find some “hairless” HAIRY TRITONS. Here’s the bald version…

Can you believe all the different TRITONS? This one is the SHELLY DWARF TRITON.

One more TRITON for the day… the ANGULAR TRITON. The orange one with the white tips is spectashellar!

We found more CONES too! It’s astounding to me how many different CONE species there are throughout the world … especially throughout the Caribbean. Since there are so many varieties of CONES, I’m almost positive this one is the CARDINAL CONE…

The MOUSE CONE is a little smaller, squatter and looks a bit more faded than the CARDINAL but we had so much fun finding them because they were everywhere.

We found CROWN CONES in 7 different colors from banana to dark chocolate which seemed pretty common too.

Some of the MUREXES are so different from ours here in Sanibel as well. We found Antilles Murexes in a few spots but most had broken tails. They are still beautiful!

The WEST INDIAN MUREX shells we found remind me so much of our LACE MUREX, right?

I don’t know what they feed the APPLE MUREX shells down there but they are giganshellous! Really, this is an APPLE MUREX next to a quarter. Did a cargo ship of Miracle Grow spill over down there? Ha!

This is next shell was listed as a DOG WINKLE in one of my books but it looks nothing like a DOG WINKLE in any of the others…  maybe it’s a CHESTNUT LATIRUS? This was such a plain shell next to the other TRITONS, MUREXES and others but we saw hundreds of them so I hope that yall can help with me with it. The best I found was LEUCOZONIA LEUCOZONALIS (no common name?) but when “NASSA” came up in search results, those shells look so knobby compared to these. Yes, they are beach worn just like all of our other shells but I doubt they all got this smooth at the same time.

There are still dozens of shells I haven’t identified and maybe one day I’ll get back to identifying all of them but for now, I’ll enjoy looking at them displayed in my living room but I’m ready to get back to my favorite beaches… Sanibel and Southwest Florida beaches! I hope you enjoyed the shells and posts from Guantanamo Bay, Cuba thanks again to Lee and Susan for such a great shell adventure!

PS- We have new dates for our iLoveShelling Cruises to shell together on the secluded island of Cayo Costa! Come join us! CLICK HERE for more info.