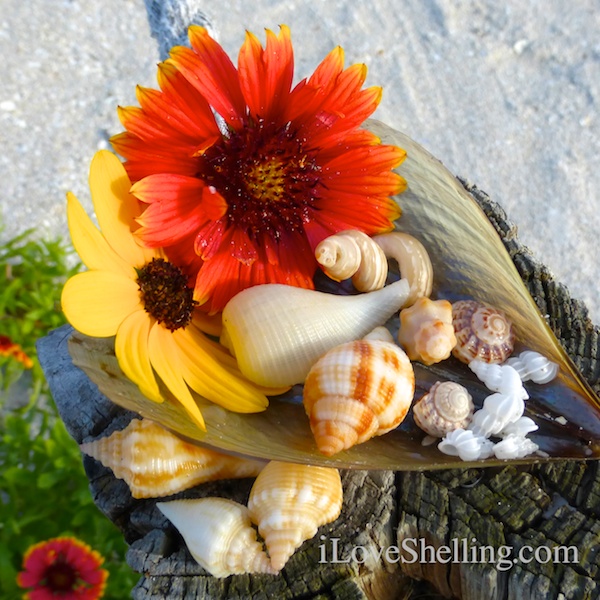 Sunrise on Sanibel is such a beautiful sight at Lighthouse Beach, I always tell myself I need to get out there in the morning more often.

As I was shelling at the waters edge, I met a family enjoying the cool morning while collecting shells along the same path. Rick, Cindy, Sarah, Harley (she’s peek-a-boo-ing between her mom and dad’s legs- heehee) and Richard from Virginia were tickled with their finds.

Cindy found this awesome BRITTLE STAR on the beach which we thought was too dry to still be alive but while we inspected him and all ooohed and aaahed, the little guy started waving one of his arms to tell us he still had some life in him. Omigosh! He needed water! Cindy hurried to get this guy back to the Gulf Of Mexico.

I should have known I would see award winning SAILORS VALENTINE artist Constance Miller shelling at the lighthouse because the Sanibel Shell Festival this week. She loves to find her own WENTLETRAPS and other mini shells to use in her gorgeous designs.

Clark and I walked just south of Bowman’s Beach to catch sunset and saw the perfect Sanibel Stooper shelling the sand bar just as the sun reached the horizon. So beautiful!

Just after I snapped the photo, that Sanibel Stooper walked back towards the beach so I approached him to tell him I got a fun photo of him at sunset. Holy Cowrie! It was Rick again! LOL Yes, that was the same Rick that I had just met in the morning shelling at Lighthouse Beach. He and his son Richard (Marley’s dad) were still shelling but this time near Bowman’s too. It’s a small island, huh?

These are just a few goodies they pulled out of their shell bag. Lots of treasure!

If you are near Sanibel Island this week Thursday- Saturday (March 6,7,8 2014) you shouldn’t miss the 77th Sanibel Shell Festival. It will be lots of fun AND…. I am entering into the show for the very first time. I have two pieces that will be judged in the artistic division so I will definitely show you pictures later in the week after they have been judged. Yes, judged… Ack! Pressure! Please wish me good luck! And of course I will be blogging about all of the other exhibits as well. I hope to see you there!