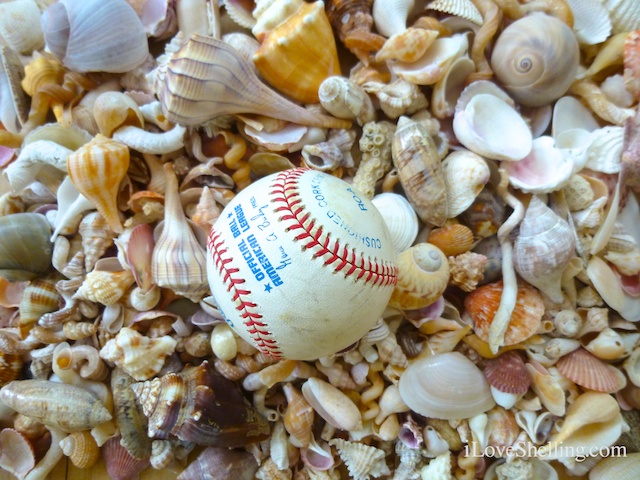 Back in March, I had a little fun giving some shelling advice to some baseball fans at a Minnesota Twins Spring Training game.

I love baseball so it was so cool to be interviewed about shelling by Dan Gladden and Kris Atteberry for the Minnesota Twins Radio Network in the radio announcers booth overlooking the baseball field during a rain delay on March 20th.  I got to hang out with Twins 2-time World Series champ Dan Gladden!

I was supposed to be interviewed in-between the 4th and 6th innings but since they tarped the field because of the rain, they called me up early. I felt like I was just brought up from the minor leagues for my first pitch for the big leagues. LOL

Thank goodness I didn’t have too much time to think about it since I was a bundle of nerves. They gave me a headset… then they started pitching questions. I just had to bunt. But think about it, there many similarities with baseball and shelling. Both are outdoor sports, people collect both shells and baseballs, you always remember the home runs (finding the rare shells) and both attract really nice folks. I’m sure there are countless similarities!

Here’s the link of the interview to hear what ball players want to know about shelling ;)

So much fun to share the shelling love! Oh, before we got called up to the radio booth, Clark and I looked for some shelter to get out of the rain. We ended up being right beside the beautiful young lady, Marcella who was about to sing the National Anthem to kick off the game. Even though it rained, the night at the ball park was spectacsheller!